The business started in 2009 as a personal challenge to solder together a $55 radio transceiver kit (Small Wonder Labs SW80+) with the idea of creating a low power, off-grid, emergency communication device. The 80M/3.5MHz band was chosen to utilize NVIS propagation for regional coverage with a low hanging, horizontal, halfwave endfed wire antenna. 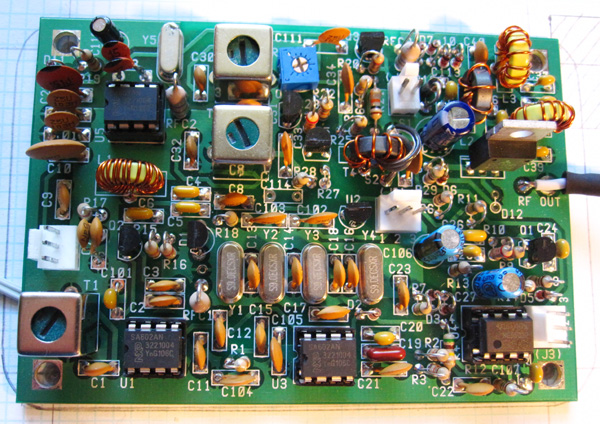 Rather than using the stock metal housing, I decided to build the SW80+ CW transceiver into a clear, plastic enclosure that I found at a store. This had enough room to secure a rechargeable battery to the bottom of the box. I cut a piece of Lexan for the control panel, drilled holes for the controls, and glued an LED volt meter in place. A capacitive touch keying circuit was installed as well, with acorn nuts through the corner of the enclosure as key contacts to send the dits and dahs. 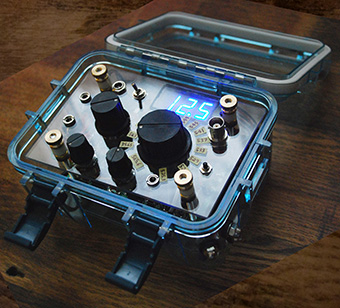 The project was a success.  The unique, attractive, see-through design was reminiscent of an old corded telephone I came across briefly and admired in my childhood, showcasing the circuitry and inner electrical components.

A series of similar builds were inspired, each one evolving to include more technology, such as; audio amplifiers with speakers, filters, digital frequency readouts, and zerobeat indicators. Anything fun and useful I came across was integrated diligently. 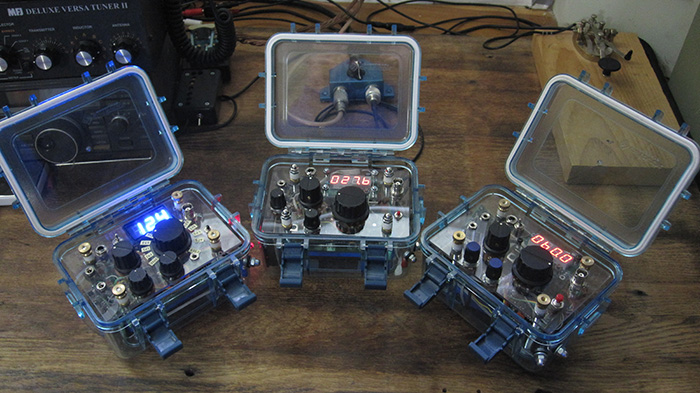 The control panel layout was always a fun artistic challenge. The idea for me has always been to create a nicely balanced design, with enough spacing between the knobs so that (for example) the users' fingers would not be running into other controls. The arrangement also needed to be intuitive - I did not want the user to be reaching over and blocking any displays while turning the VFO knob, or the cables of any plugged in accessories to be in the way of operation. Of course everything also needed to fit and work together internally. 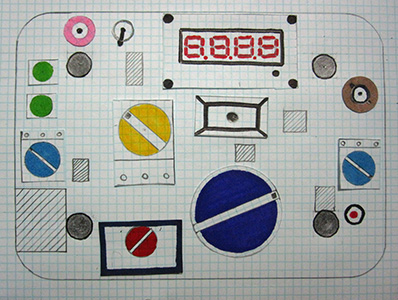 I often used the knobs and control components set on the panel as a mockup, or paper cutouts as part representations on a grid to get things to line up nicely. When a final design was decided everything was made more precise on the computer and templates printed for cutting and drilling. 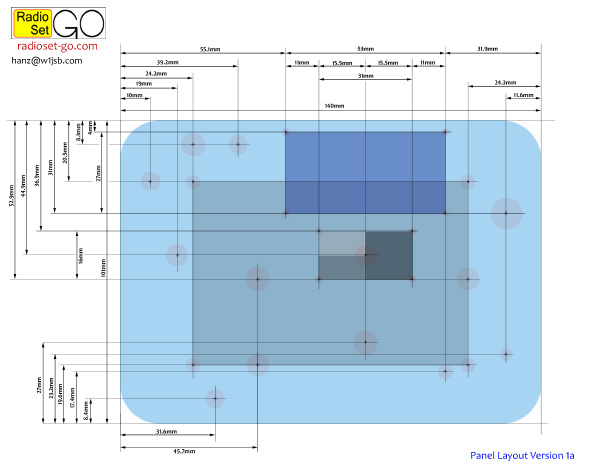 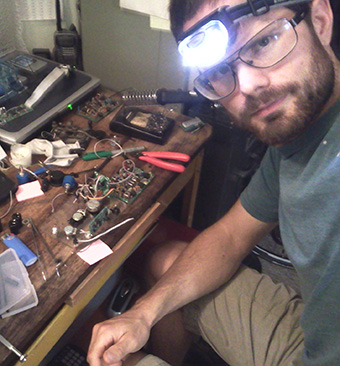 The shop started out in a tiny apartment in the woods of Sanbornton, NH. I had a minimalistic ham station and a makeshift work area in the corner of my bedroom and used simple, common hand tools. Click here to see a video of the SW+ circuit

In 2011, the name 'RadioSet-GO' was thought of and the web domain established, just as a band with the same name had gone offline. The radio creations got a lot of attention on the internet and sold quickly through eBay. One of the RadioSet-GO enhanced SW+ designs was featured in the June 2011 issue of CQ Magazine. 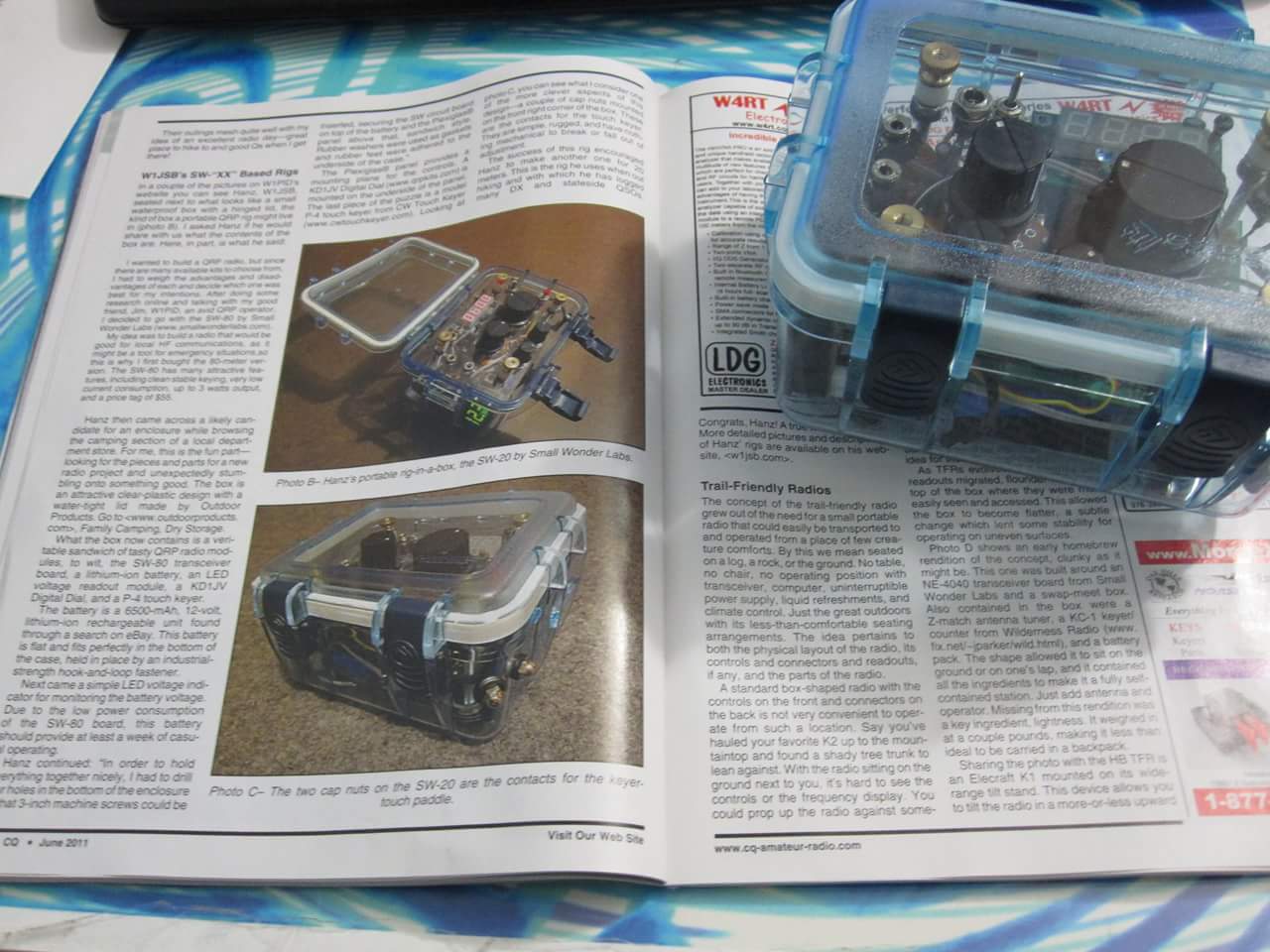 Click here to see and hear one of these completed radios in action.

Someone who discovered my website, contacted me and mentioned the similarity of what I was making to WWII parasets. I had not known about parasets until then, but found them (and their related history) fascinating. If you are wanting to learn more, I recommend the documentary, book, and movie, The Princess Spy. For excellent information and pictures of various parasets, try to get your hands on a copy of the book The Clandestine Radio Operators. 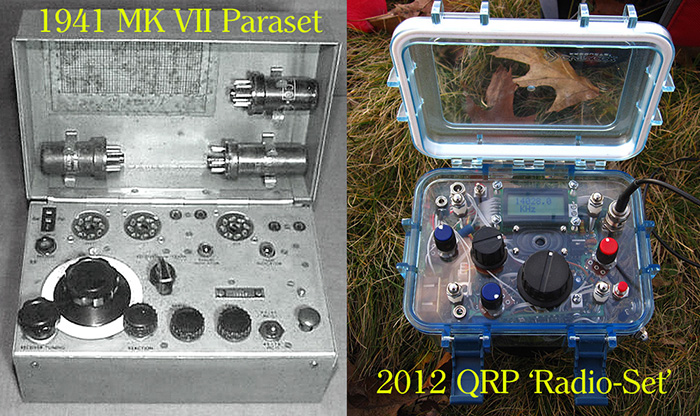 A few years later (around 2013) I moved into a house about a mile up the dirt road from where I had been living. The new location was on the side of a mountain, where I took care of goats and a horse, partially in exchange for rent. It was a big house with an amazing view, however, it was unfinished and barely had any heat. This made building radios difficult in the harsh NH winters! Nevertheless, I had quite a lot of space to expand the workshop and the freedom to do a lot of building. 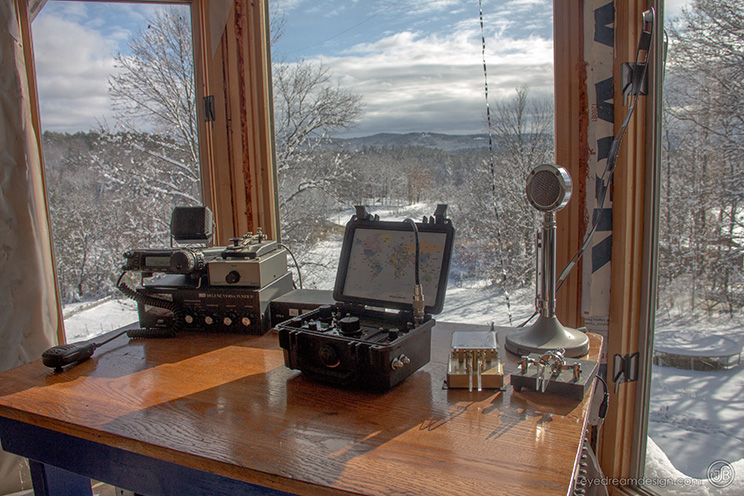 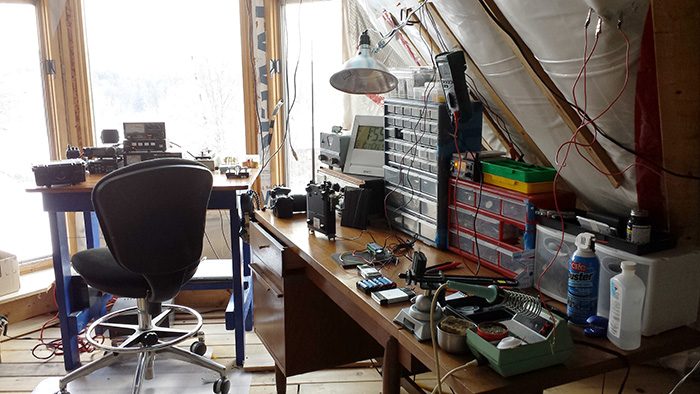 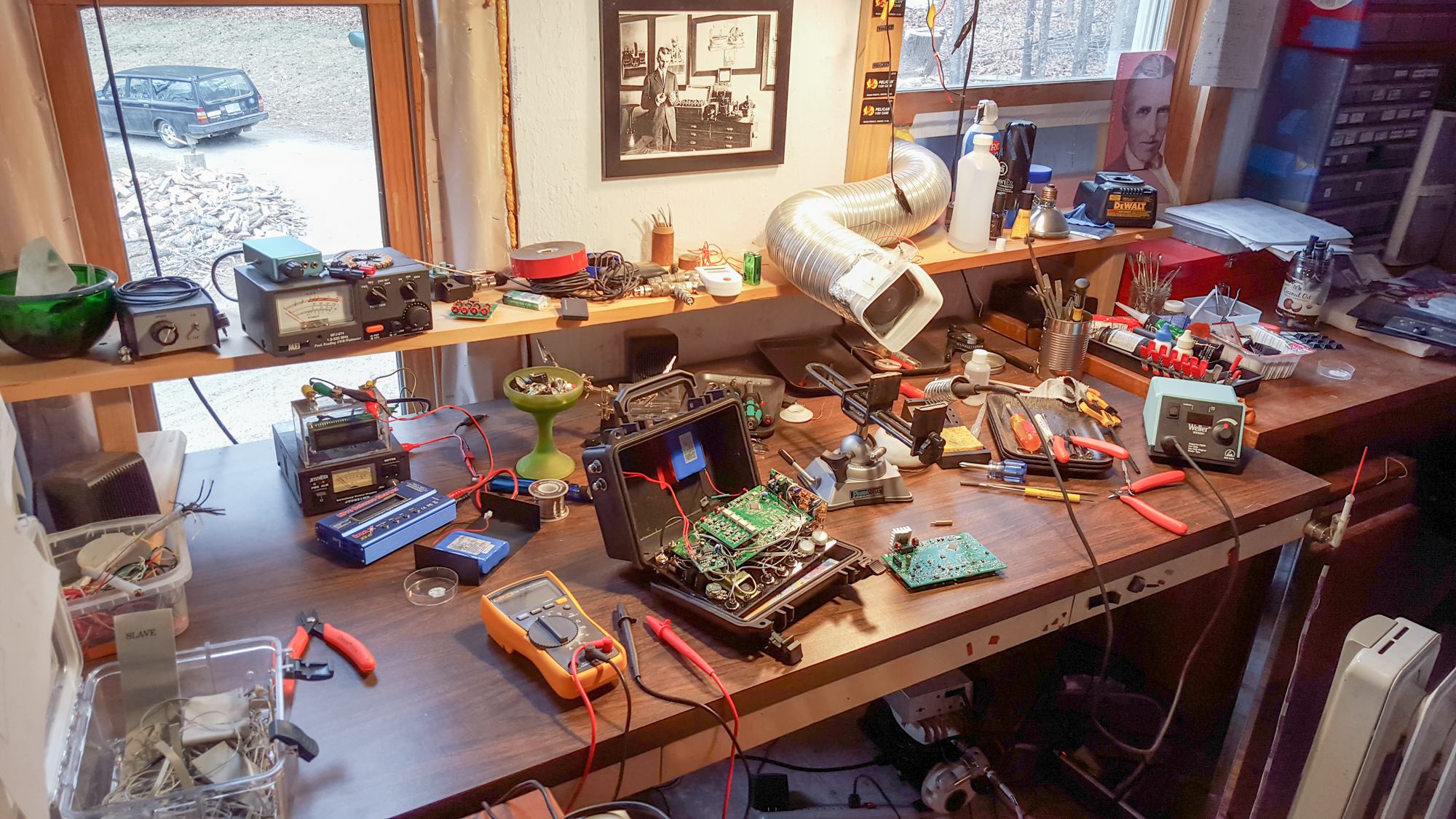 When Small Wonder Labs closed down for business, I had to find alternative radios to work with. The YouKits HB-1A and later HB-1B, multiband CW transceivers were attractive candidates. These came pre-assembled, so I had to take the circuit boards out of the stock enclosures and unsolder many components as part of the conversion process. I began using Pelican cases rather than the clear boxes. 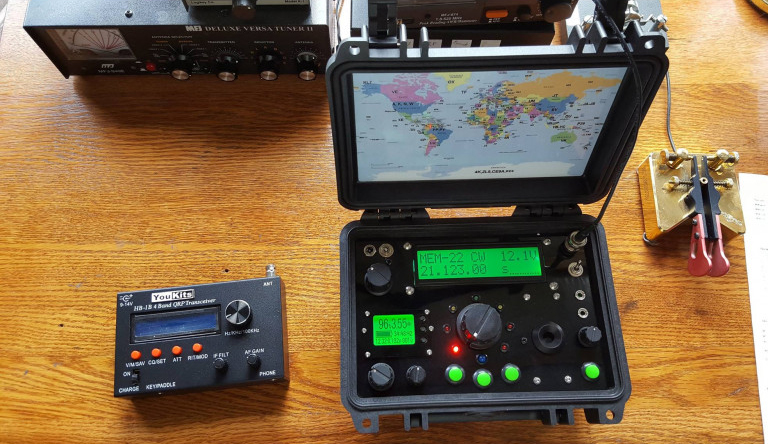 As much as I love the clear designs, I began to enjoy what could be done with black Lexan for control panels. Some of the major upgrades for the HB-1B conversion included a much larger backlit LCD screen, 5 watt amplified speaker, LED zerobeat indicator around the tuning dial, battery power monitoring, and integrated capacitive touch keying. 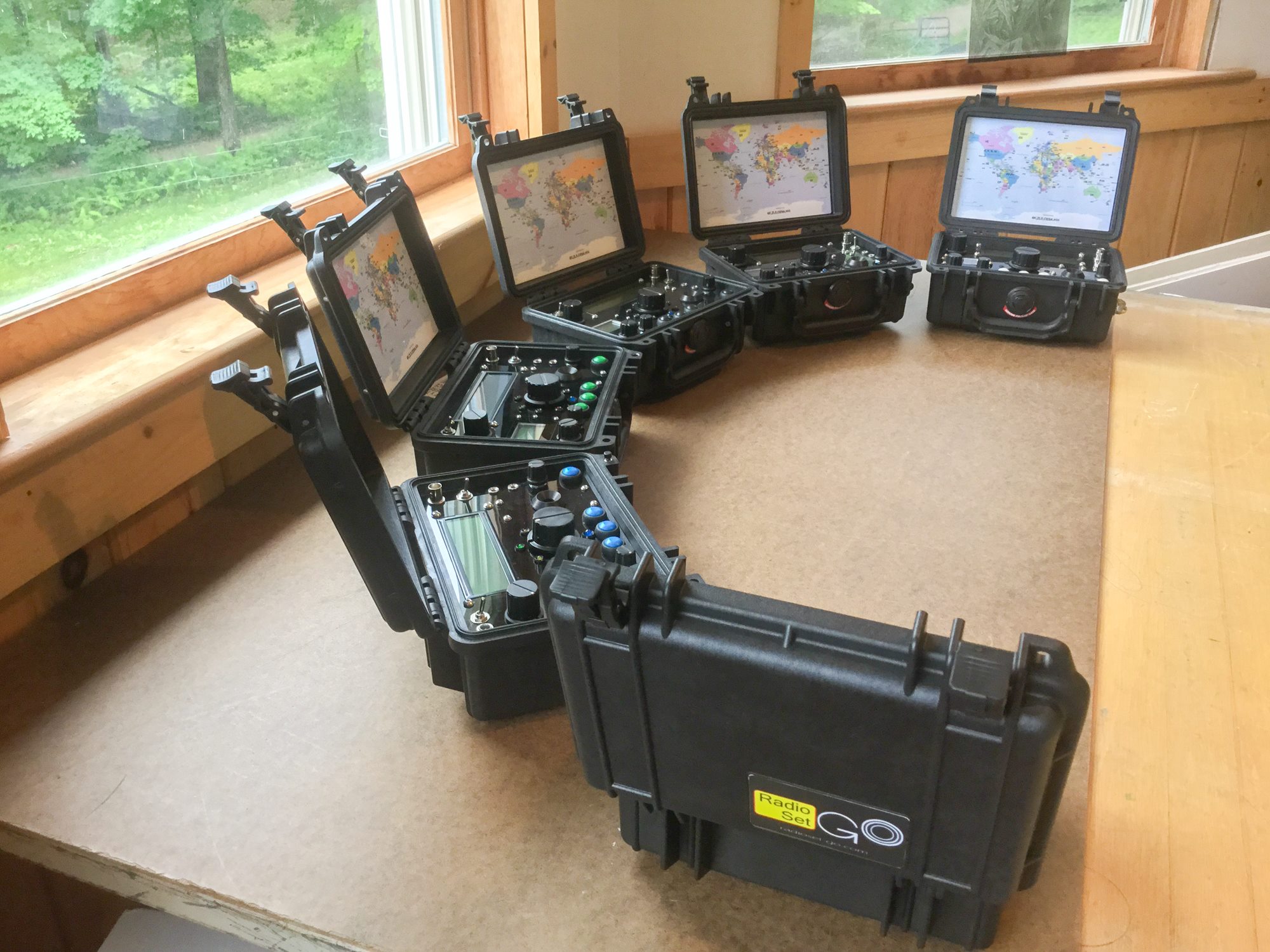 The HB-1B quickly became a popular design, and people kept me busy with orders! In between working on those, I completed several custom builds, including a 15M Ft. Tuthill, a 20M MFJ Cub for a friend, and an ATS3B for myself, which was also my first experience soldering surface mount.

As mentioned before, I was caring for a horse, two goats, and was also given two cats. My girlfriend moved in, bringing with her a pet pig and a small dog. She ended up also getting a bunch of pet turkeys, and we adopted another small dog. Oh, and she got a couple of ducks too. If we weren't crazy enough at that point, we also got two goat kids of our own. Those were busy days, and it only got busier!

In the fall of 2016 we ended up moving into a very tiny (yet cozy) house built in 1830, having our first son, and getting married. I couldn't do much building there, with so little space. I set up shop temporarily in my in-law's basement in Westford, MA, and built radios there on the weekends.

With my father in-law's help, we entirely rebuilt an unheated section of the house we were staying at, transforming it into a new workshop. It so happened that immediately upon completion we found a house and property we liked, put an offer on it and it was accepted. The 'new' house basically needed to be gutted and rebuilt entirely on the inside. It was several years of almost non-stop projects to make the living space functional and enjoyable.

Shortly after moving into the house, (which is where we are now) I started working with Elecraft equipment. I have always greatly appreciated Elecraft, and absolutely love their high quality gear. A KX2 was the first of their radios I had to work with. I definitely did not want to disassemble what they had created, as it was already perfect (in my mind), but, I knew some things could be enhanced by retrofitting it into a Pelican case! 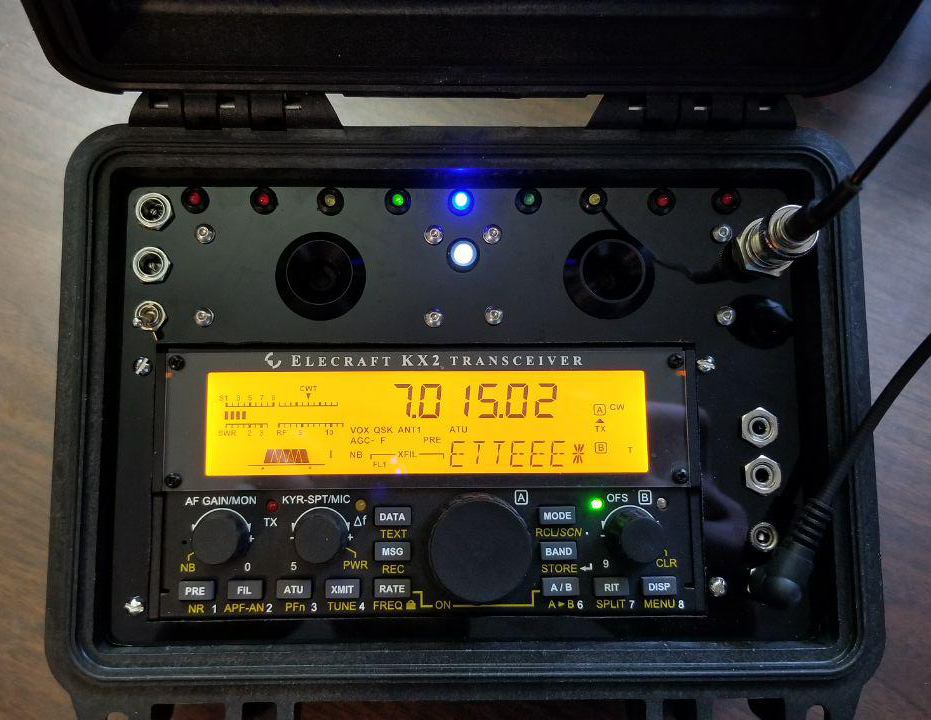 KX2 retrofit V1 included anodized aluminum control panels with etched and infilled labeling, giving a clean and professional look. The panel had a vent allowing a heatsink and fan to keep the KX2 cool. This was also a popular design.

Upgrades for the KX2 retrofit V2 include increased space for more battery capacity, larger 15W speakers, dual cooling fans with high/low speed, a heatsink and ventilation, and an automatic power control circuit that I designed to replace the toggle switch. 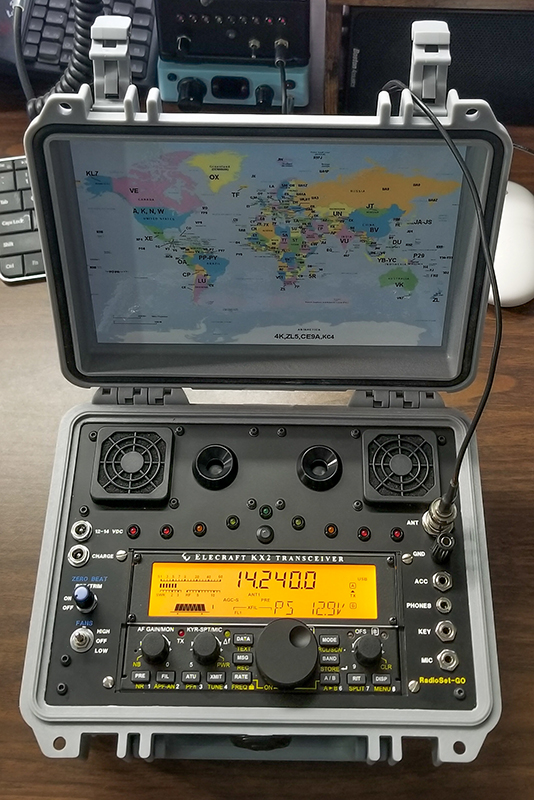 KX3 and KX3 with PX3 retrofits followed, as well as some custom builds for the mcHF and LNR MTR3b transceivers. 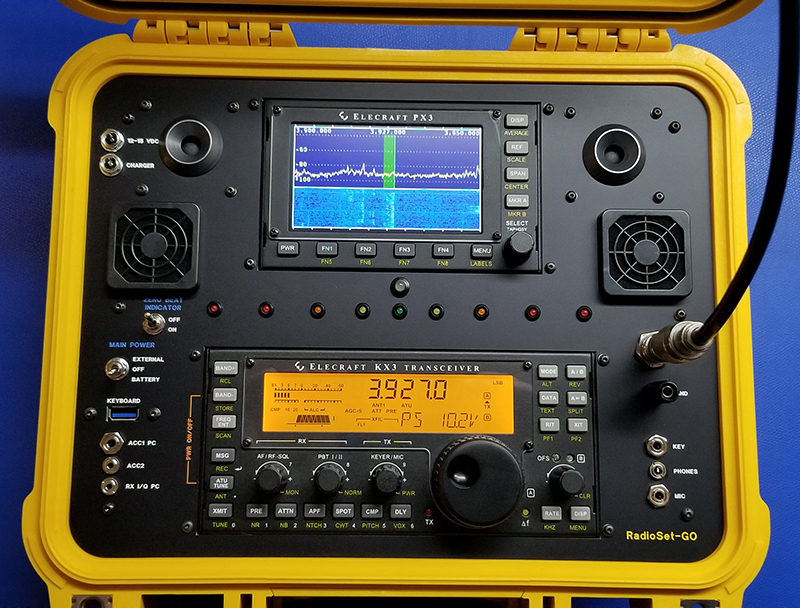